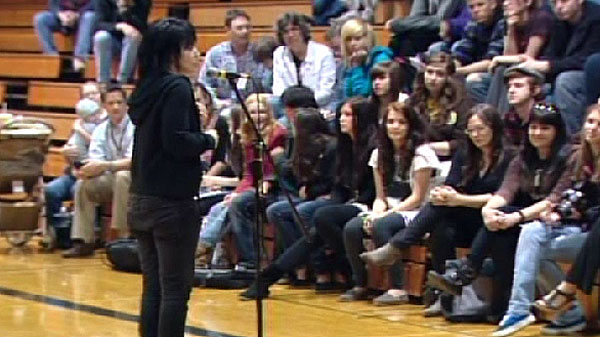 Just two days after performing at Tacoma, Washington on Saturday, Joan stopped by Scriber Lake Alternative High School in Edmonds, Washington, to speak to the students about getting her GED.

Born to be Jetthead is living testimony to Joan’s positive influence on all of us, so welcome to the Jetthead family, Scriber Lake! If any of you stumble upon this site, leave a comment and say hi! 😀

EDMONDS, Wash. — Need a way to get students to listen at school? How about inviting a rock star.

That’s exactly what happened at Scriber Lake Alternative High School in Edmonds. The school, which enrolls students who are at risk of dropping out or have learning disabilities, hosted Joan Jett Monday afternoon.

“I said, ‘This person has a vision that I want my kids to see,'” said Gary Lange, English teacher at Scriber Lake.

On a chance, Lange sent emails to Jett’s longtime manager Kenny Laguna. To Lange’s surprise, he got a response, and then confirmation that Jett wanted to visit the school.

“I thought, ‘You’ve got to be kidding!'” said Lange. “We are a little high school in Washington state and you are going to take me up on my request!?”

Jett spoke to the student body of about 200 teens in the schools gymnasium. Her visit lasted about an hour, first starting with a brief background of how she started, then trailing into a question and answer from the students.

Jett worked the crowd, often times asking students to speak up because she called herself a “deaf rock star.” She also gave out hugs on request and accepted students artwork drawn especially for her.

“You see this,” she said holding up a drawing. “He loves art, he loves to draw. There are a million things he can do with that. So do it.”

Her visit was a hit with students.

Click HERE for the rest of the article, including more quotes from Joan, more pics, and a VIDEO of the newscast. Follow the jump for other articles about of her visit. GREAT STUFF. END_OF_DOCUMENT_TOKEN_TO_BE_REPLACED