On Thursday, October 23, Joan Jett received the “Rocker of the Year” award at a benefit that raised $1.5 million for Little Kids Rock, an organization that works to bring music education and instruments to public school children across the United States. The benefit was held in New York City at the Hammerstein Ballroom.

We’ve seen Joan get some awesome awards before, most recently at the Alternative Press Music Awards and the Revolver Magazine Golden Gods Awards, but NOTHING compares to this. Joan was serenaded by covers of her songs performed by her friends and fellow musicians, joining in on a few herself, and they didn’t just do the hits!

(There are videos, which I will post separately so you can enjoy them unencumbered. 🙂 )

• Cheap Trick, “I Hate Myself For Loving You”

• Gary US Bonds and Jake Clemons, “Eye to Eye”

• Tommy James and Joan Jett, “Crimson and Clover” [JJElektric: This is the first time Tommy and Joan have ever performed this together!]

• Alice Cooper and Joan Jett, “Be My Lover”

The night ended, fittingly, with an epic finale of Joan’s classic ‘I Love Rock N Roll.'”

…And that’s not all:

One of the items up for auction during the event was this AMAZING pic of Joan made entirely out of guitar picks! Unfortunately, I can’t find any information yet on who created it, but I’ll keep looking. 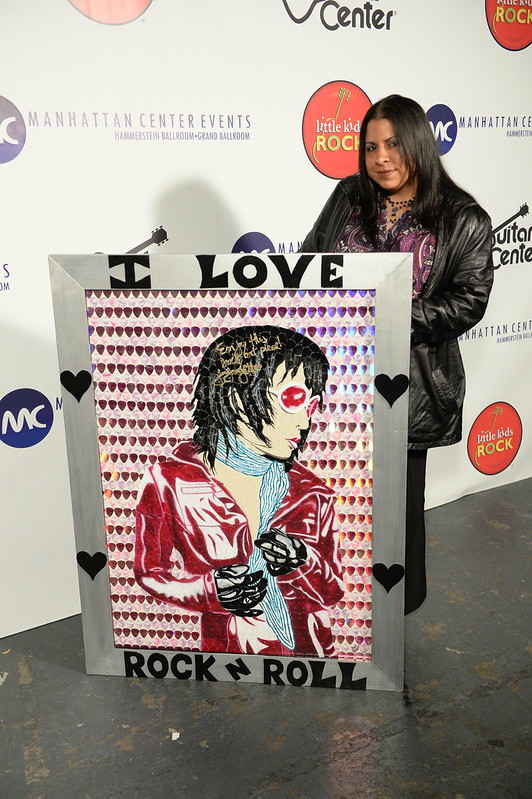 Joan called radio.com after the event to discuss the tribute, her roles in Big Driver and Undateable John, and lots of other cool things. Here’s a small snippet – read the full interview HERE –> http://radio.com/2014/10/25/joan-jett-interview-all-star-tribute-concert/

Radio.com: So, what was going through your mind as you were seeing all of these artists perform your songs?

Joan Jett: It was surreal, I had to keep pinching myself. I couldn’t believe those people were there for me. Some of these artists who I grew up with, or who are peers of mine. They were all there: they were all doing my music . It was crazy! It’s hard to put into its proper context. I haven’t quite found the right words to describe it, if there are any words to describe it. The word “surreal” doesn’t really cut it, now that I’ve heard myself say it a bunch of times. It was beautiful, I felt the love in the room. It was great.

Earlier this year, you were honored at the Revolver Golden Gods Awards [she was the first woman to win the “Golden God” award]. You’re accepted and loved in metal, in punk, in Steven Van Zandt‘s Underground Garage rock scene, and by straight-up classic rock fans. But all of those crowds don’t always mix, it must feel cool that you can roll with all of those crowds.

Last night during your speech, you said you learned music in school, but you didn’t learn rock ‘n roll.

At my school, we had band class, and I played clarinet for a few semesters. I couldn’t play  clarinet today to save my life! And I don’t know how to read music. I think what I learned there was that I love to play music, but maybe the clarinet just wasn’t my instrument. It took me a little bit longer to latch onto the guitar. I learned so much about Little Kids Rock, it’s an incredible organization. What Steven and Maureen [Van Zandt] has done for it, also [Little Kids Rock CEO] David Wish, and even Hot Topic who has been involved for years raising money…. I think that it’s incredible and so important. Because the kids do need these programs in school: art and music.

Little Kids Rock, to some degree, focuses on contemporary music, giving kids guitars and basses and drum sets. What I meant in my speech was that in my music classes, we didn’t get those options: you’d play violin or you’d play clarinet or something like that. They certainly didn’t have drum sets, they may have had cymbals or a marching snare. But kids hear a lot of music from a young age, and if they have the inclination to want to try playing, they should have the option. I want to get more involved with them in the future, and do whatever I can to help.

So let me get this straight: your manager, Kenny Laguna, used to manage Tommy James. But the two of you had never ever performed “Crimson and Clover” before last night? [James had a No. 1 hit with it in 1969; Jett had a Top 10 hit with it in 1982.]

No, I’d never even met him! I’m not even quite sure when the last time Kenny saw him was. I’m sure it was more recently than back in the ’60s. I’ve been hearing stories about the greatness of Tommy James since I’ve known Kenny, which is like 30 years. It’s always: “We’ve got to get together with Tommy sometime, you’ve got to meet him.” It just all came together last night. It was so cool. I was so nervous at rehearsal, I couldn’t remember the words. It’s funny when something like that happens: that song  is so ingrained in me. But being there with the man who sang it…. Not to mention that when he’s playing it, it sounds exactly like the record! And then it’s my turn to sing, and it’s like, “Sorry! I need another minute to get it together!”

So honored to play Joan Jett's song "victim of circumstance" , if it wasn't for Joan Jett there wouldn't be a path for the likes of me

You can see how so happy she was – She deserves many nights like that for what she has given to her music! @joanjett pic.twitter.com/MhEbTtakSN

Photo: One more from last night of @joanjett with the brillant @toddoldham … This artist, designer, author,… http://t.co/V85rMaj9BL

What an amazing night. Kids rocking on stage w/ Joan Jett. Does not get better than that! @littlekidsrock #LKR2014 pic.twitter.com/uoAZCQrABe