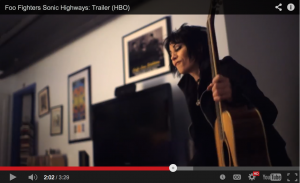 Joan Jett is one of the artists featured in HBO’s documentary series Foo Fighters Sonic Highways, which premieres tomorrow night (Oct 17) in the US, at 11:00 PM ET. BBC Four will get it on Sunday, Oct 26 (according to www.gigwise.com). The show will chronicle the evolution of the band’s upcoming Sonic Highways album, due out on November 10.

I’m not sure which specific episode(s) Joan will appear in, so I’ve DVR’d the whole thing! I’ll give you a head’s up when I see her. Here’s the extended trailer:

The songs build during each episode and are performed at the end. “In the finale when you hear the song you will recognise all of these references from stories you have heard in the last hour,” Dave says.

Joan attended a red carpet event for the series premiere in New York City on October 14. Loads of cool pics, plus this interview from MTV! (from http://on.mtv.com/1sNclqI):

MTV News caught up with the iconic musician — best known for classics like “I Love Rock ‘n’ Roll” and “Bad Reputation” — at a red carpet event for The Foo Fighters‘ new HBO documentary series, “Sonic Highways,” which premieres this week ahead of their record by the same name. In the series, Dave Grohl and Co. travel around the country, telling the stories behind eight cities’ music scenes and interviewing and collaborating with musicians like Jett.