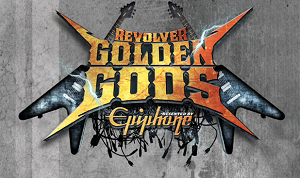 Revolver Magazine has announced the nominees for its 6th Annual Golden Gods Awards, and they are giving Joan Jett an award that us Jettheads have already graced her with in our hearts: the coveted Golden God Award!

Iconic rocker Joan Jett will be the recipient of the Golden God Award, given each year to one special honoree that embodies the spirit of hard rock and metal.  The legendary axewoman, singer, songwriter and performer makes her mark in Golden Gods history as the first female to receive the coveted honor alongside such previous winners as Rob Zombie, Alice Cooper and Gene Simmons.  Jett’s latest album, Unvarnished, surged into the top 50 on the Billboard Top 200 upon its 2013 release and features the hit single “Any Weather.”

“No one deserves this award MORE than Joan Jett.  She’s never compromised who she is – she’s a rocker through and through,” commented 2011 Golden God Award-winner Alice Cooper, who will present Jett with the award at this year’s show.  “I wish some of the younger bands had the balls that Joan Jett does!”

Both honorees will take the stage for special performances as part of the 2014 REVOLVER GOLDEN GODS AWARDS SHOW, with Rose being joined by Guns N’ Roses and Jett appearing with the Blackhearts.

She is DEFINITELY getting the award — no frantic 24 x 7 voting required! The readers do vote for the other categories, but Joan is not nominated in any of them. Whew. (I’m kind of pissed that we’re not nominated for most dedicated fans, but whatever. Can’t win them all.) See the full announcement and the full list of nominees here –> http://www.revolvermag.com/news/2014-revolver-golden-gods-announced.html

Joan and The Blackhearts will perform live at the awards ceremony on April 23rd at Club Nokia in Los Angeles, CA. (How cool is it that Alice Cooper will present her with the award??) Tickets to the event are on sale now –> http://www.axs.com/events/248802/revolver-golden-gods-tickets

One thought on “Joan Jett is the first female Golden God”