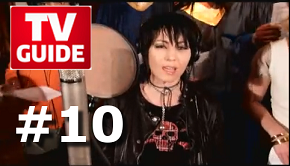 They did not mention Joan by name, but she played an integral role in the 10th spot on TV Guide Magazine‘s 60 Greatest Talk Show Moments list:

Read the rest of the list here: http://www.tvguide.com/News/TV-Guide-Magazine-60-Greatest-Talk-Show-Moments-1074174.aspx. The list also appears in the December 9-22 print issue of the magazine.

Check out the infamous video–Joan’s first appearance is at 3:15, and she’s in there more than once. (The F-words are bleeped out, but you might get strange looks if you play it at the office. 🙂 )