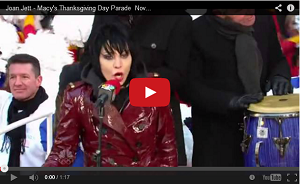 South Dakota’s loss was Varsity Brand’s gain. Joan Jett and the Blackhearts “performed” a snippet of “Any Weather” from Unvarnished on their float with dozens of cheerleaders surrounding them.

I know it was cheesy lip syncing with no guitars, but all the musical acts lip sync during the parade, and I don’t care. JOAN JETT WAS ON MY TV! *jumpy claps*

We knew that The Blackhearts had not been “thrown” or “booted” out of the Macy’s Thanksgiving Day Parade, despite numerous reports to the contrary, but we didn’t know which float Macy’s had found for them after Joan volunteered to switch floats until shortly before their performance began.

And as for the South Dakota float? The band that replaced The Blackhearts was The Summer Set – a band also known for having vegetarian members. From mix97-3.com:

So who DID replace Jett on the South Dakota float? A band called ” The Summer Set”.

Oddly enough, when you google “The Summer Set” and “Vegan” you get taken to the PETA website which has the following post:

“What’s cooler than Scottsdale, Ariz.’s The Summer Set? Knowing that vocalist Brian Dales and bass player Josh Montgomery are vegetarian and have tons of love for their adopted pups! Brian and Josh believe that eating a vegetarian diet is a “higher evolved way of living.” In this day and age, with so many delicious alternatives to meat readily available, there’s no need to continue consuming the flesh of animals to maintain a protein-rich, well-balanced diet. In fact, a meatless diet is better for your overall health and the environment. Every person that maintains a vegetarian diet saves more than 100 animals a year, lives a much healthier life, and helps reduce climate change. It’s a more highly evolved way of living, indeed!”

Congratulations to those who complained. We get to make national headlines. Twice. Over a parade.

I feel badly for the Jettheads from South Dakota– I know I would have been proud to see Joan perform on a Pennsylvania float. It seems silly to care, but, we’re JETTHEADS. It matters. Big hugs to South Dakota. Let’s move on now.

Here are some tweets and pics from the event, aka BEST. THANKSGIVING. EVER. 😀

Getting ready to ride in Macy's Day Parade, look who I bumped in to! Joan Jett #awesome pic.twitter.com/WsQWUTvQh9

We had the BEST time performing with @joanjett in the #MacysParade! It was an experience of a lifetime! pic.twitter.com/BtLtSASW1w

Joan you killed it at the Macy's parade. So beautiful @joanjett

Soooo @joanjett was lookin' pretty fierce in her dark red patent leather trench on the #MacysThanksgivingDayParade! Love her.

I'm thankful I got to make eye contact with @joanjett during our performance. Yay for famous people singing right in front of my face 🎉

@joanjett LONG time mgr. Kenny Laguna by her side rockin it at Macy's TDay Parade. BThankful for relationships that stand the test of time.

Joan jett someone hold me SHES ON MY TV

"I HATE MYSELF FOR LOVING YOU!"–Man at the parade when Joan Jett rode past.