Halloween weekend is here, and the ghoulish holiday has Joan Jett written all over it this year.

Joan has made several lists for best costume ideas:

1. Artistdirect.com listed Joan as one of this year’s top 13 best rock Halloween costumes:

Joan Jett has a strong, distinguishable look- the leather jacket, the “jett”-black hair (sorry, I had to) and the rock-and-roll attitude. She’s also a very timely costume idea with The Runaways movie coming out earlier this year.

2. Joan’s look from The Runaways is described on totalbeauty.com’s list of 2010 Halloween Costume and Makeup Ideas,  complete with instructions on how to apply the makeup.  (Although I wish they’d actually used a picture of her from The Runaways.)

3. AOL featured Joan on their list of 2010 Halloween Costume Ideas for Music Fans. They show an 80s Joan Jett wig you can buy from Amazon, but I think it looks more like Blackie Lawless than Joan.

If you’re looking to dress up like Joan for Halloween, eHow.com has an article on how to do it HERE. My only complaint is that they refer to Joan’s signature shag hairdo as a mullet, which it most certainly is not! Trust me, if you wear a black leather outfit and a black mullet wig this Halloween, you’re going as Billy Ray Cyrus’ heavy metal twin, not Joan Jett. For a recent Joan look, check out this girl from last year. (Repeat after me: That is NOT a Rock Band guitar…) 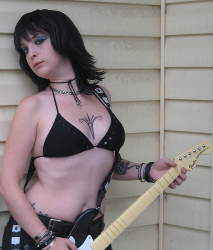 This costume could be a BAD idea if you live somewhere cold!

Corinne Wnek of NJToday.net had a Halloween party this past weekend. I want to see a picture of this:

My 86-year-old mother was an eighties rocker, ala Joan Jett, complete with long wig, cigarette and guitar. And then there was that gesture Joanie was famous for just to prove how hard a rocker she was.  In polite society we refer to it as ‘flipping the bird’.  Let’s just say my mother nailed her character.

Want an entire Joan Jett theme to your evening? Try these out:

1. See a Joan Jett cover band. Tonight, Blackbox will be performing as Joan Jett and the Blackhearts at the Double Door in Chicago, Illinois, along with other bands posing as Aerosmith, Duran Duran, and The Cars. Blackbox did an interview about it with the A.V. Club earlier this week. See more info/purchase tickets HERE. Check out more on Blackbox at their MySpace page and official website. The band has recorded a kick-ass cover of “I Hate Myself For Loving You” that you can get as a free download from their website (www.iloveblackbox.com) just by signing up for their mailing list.

2. Search your local theaters’ listings to see if any of them are hosting a midnight showing of The Rocky Horror Picture Show. Joan loves that movie, and starred as Columbia in 2000’s Broadway version.

3. Hosting your own party? Try serving these cupcakes inspired by The Runaways movie:

I hunted all over for Joan Jett pumpkin stencils, but I couldn’t find any. Instead, when I Googled Joan Jett and pumpkins, all I could find was this video of Smashing Pumpkins singing “I Love Rock-n-Roll”. LMAO:

Have a safe and fun Halloween!

If you have pics of any Joan Jett costumes or a Joan Jett-themed pumpkin, send them to me!

One thought on “Have a Joan Jett Halloween”