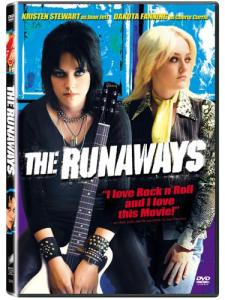 7/14 CORRECTION: The iTunes version does not include the commentary track, but the DVD and Blu-Ray will. I’ve fixed this below:

Available on all three versions:

Available on DVD and Blu-Ray only:

Available on Blu-Ray only:

Available on iTunes only:

The official movie website now promotes the DVD. The original theatrical content is linked at the bottom of the page, so we can still see all the goodies we had before.

The site also has a link to a Facebook game where you can enter to win prizes, including a Joan Jett Gibson Blackheart Melody Maker guitar. You need a Facebook account to enter.

More about the DVD and Blu-Ray discs:

These discs are Region 1 only (US and Canada). There are websites out there that can give you codes and instructions to make your DVD player region-free if you don’t want to wait for the discs to be released in your region. Some places also sell region-free DVD players. A Google search should point you in the right direction. I don’t know if iTunes is international or not.