Christmas is here, Jettheads, the season of giving. This year, I’m hoping that a Joan Jett Barbie doll makes its way under my tree to keep my Edward doll company when I’m not home. My gift to you is this blog. Because I’m cheap awesome. 😀

While thinking about what I could write for you on such a festive holiday, I immediately remembered Christmas of 1991. I was 15. (Kristen Stewart was 1, for those keeping score at home.) Only one thing topped my wish list that year: tickets to my first-ever Joan Jett and The Blackhearts concert.

They were scheduled to play at Metropol (which no longer exists), in the Strip District of Pittsburgh, Pennsylvania, on Friday, January 10, 1992. As soon as I found out, I began the rather arduous begging process. My mother spoiled my sister and me rotten, but we could never take anything for granted. She was never afraid to say ‘no’, and our hi-pitched whining rarely penetrated her resolve once she had made up her mind. I had to tread carefully.

I had every reason to fear that I might not be able to go to this concert. This hadn’t been my first opportunity to see Joan live. She played at The Syria Mosque, which also no longer exists, sometime in 1989, but my mother refused to let me go. It was on a school night. No amount of begging and promising that I would get up on time the next day would sway her. I spent that entire night in my room, listening to my records in the dark, knowing that Joan Jett was less than three miles away. It was agony.

And here we were again, two long years later. I knew Christmas was my best shot at getting those tickets, so I made sure to impress upon my mother that this concert was more important to me than AIR. If I had received nothing else, I would have been perfectly happy. And the tickets were not expensive, just $14.00 in advance and $16.00 at the door. In exchange for getting to see God for an hour and a half, it was a bargain. And a far better return on investment than the Fisher Price Loom I had begged for years earlier, used once to weave half of a scarf, and then forever banished to the crappy-toy-graveyard known as our attic.

For all my begging, my mother’s face had revealed nothing. When I woke up on Christmas morning, I had no idea whether to expect elation or crippling disappointment. I tore into my huge pile of gifts. No tickets. I ran to my stocking. Still no tickets. I wasn’t worried yet, because visitors bearing gifts were on the way. I had two more chances to have my wish granted.

But it wasn’t. I received many wonderful and thoughtful gifts that day, but none of them contained concert tickets. At one point, I looked up at my mother forlornly and asked if I would be going to the concert. She didn’t want to talk about it. I knew pushing her was a huge mistake, so I let it drop, and vowed to enjoy the rest of my holiday and my gifts while secretly plotting my revenge.

The usual mix of friends and family arrived throughout the day, and for some reason, they always wanted to see all of our gifts. It was always a pain in the ass at the end of a long day, because I had to re-open, re-fold, and re-close everything. After pulling out and putting away the last gift for them, my mother turned to me and said, “I think you forgot one.” She let me stew in my confusion for a few seconds before suggesting that it might have slipped under the couch. I reached under it, and pulled out a small wrapped box. Afraid to hope, I tore into it. Inside was a small envelope, emblazoned with the “102.5 WDVE” logo–our best rock station. Tucked inside the envelope were four blue tickets, printed with Joan Jett’s name.

She Red Ryder BB Gunned me!

The euphoria shot through my skull like one of Joan’s guitar riffs, and I couldn’t stop screaming. I may have even hyperventilated. I’m remembering it eighteen years later, and I can still feel it, that unadulterated joy. I thought the whole thing was rather cruel at the time, but if she had given me the tickets first, I wouldn’t have cared or talked about anything else for the rest of the day.

The concert itself is a bit of a blur. The four of us (my sister, my mother, a family friend, and me) drove past Metropol on our way to dinner at The Spaghetti Warehouse, where we saw a long line of excited people, just like me, waiting outside. I wanted to be with them, because I knew I belonged there. I was too nervous to eat much.

The Four Horsemen were the opening act. We all stood in the upper balcony, just a little higher than stage-level. My mom said that I could stand on the floor by the stage while they watched me, but I was too scared. (Crowds made me nervous, and I had never seen a concert in a small club before.) While the others sat at the bar, I stood by the railing of the balcony, behind a couple who held each other the entire night. I had to duck to see Joan through the triangle formed by their touching heads and their shoulders. But it was enough. I never expected to be THIS close to her. I had seen Bon Jovi in 1987 and 1989 in a huge arena, and they had looked like scurrying insects. But I didn’t need binoculars to see Joan. I could see the hair on her forearms, the whites of her eyes, and the sweat on her brow, all unassisted. I didn’t sing along too much. I just wanted to watch her. It was a religious experience. (Sorry Jesus.) 😉

The sound was incredible. I didn’t have the foresight to write down the set list, so I don’t remember exactly what The Blackhearts played. It was the Notorious tour, so I’m sure I heard “Don’t Surrender” and “The Only Good Thing You Ever Said Was Goodbye.” “Little Liar” was still in the set list back then too. I don’t remember the encore either, but I remember staying for it, despite my traffic-phobic mother’s pleas to leave beforehand. She had done that to me at both Bon Jovi concerts, but I wasn’t having it this time. After what she had put me through for this, she owed me!

It would be another two-and-a-half years before I would meet Joan Jett, but that’s another story for another holiday. 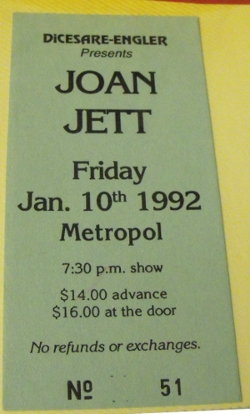 What’s YOUR favorite gift (given or received)?

I’m going to lay off the internet for a few days so I can stop neglecting my family enjoy my holidays. I hope that all Jettheads and non-Jettheads alike have a happy, healthy, holiday season, and a Happy New Year! PEACE.

I added a 1992 page to the concert archive, and I added a special page just for this concert HERE.

EDIT: After talking about this with my mom on Christmas, I realized that I got a couple of details wrong in the timeline, so I fixed them.